Posted on October 7, 2016 by artistuldestat

The Romanian state artist: hypostases of the relation between visual artists and the political power

The state artist, that is the transformation of the artist in a worker with an ideological program was the main result of the establishment of communist regimes in Eastern Europe after 1945. This panel presents an analysis of the Romanian case as it was administered by the Union of Visual Artists (UAP), one of the creative unions founded on the basis of the trade unions, syndicates of the inter-war period. The participants to the panel present different case studies of the collaboration between artists and political power: through an analysis of the relation with the Securitate, through the investigation of the history making of the Communist Party through art, as well as that of Atelier (Studio) 35 and its apparent larger freedom offered to young artists. This panel is part of the research project PN-II-RU-TE-2014-4-0243 ‘From the “state artist” to the artist dependent on the state: the Union of Visual Artists (of Romania) (1950-2010) – the Bucharest branch’ financed by the UEFISCDI.

PhD Dan Drăghia, University of Bucharest, CPES, Rewriting the past in the sense of class struggle through artistic production in communist Romania

Art was used since the beginning of the 1920s in the Soviet Union by the communist regimes as a tool of identity and creation of legitimacy. Despite an emphasis placed on change, and “the new world”, a big part of this construction project had to come from the past, at least in regards to the trajectory of the socialist movement. In Romania, this was even truer, given its past, which witnessed a weak movement of workers’ struggle, and a weak leftist tradition. Among all others, the artistic sector was called to contribute to this effort of reading the past through the Party’s own ideological terms. This paper outlines the main features and actions taken by the Romanian communist regime in this respect through its institutions of control in the art sector, mainly the Union of Visual Artists (UAP), as well as analyzes some illustrative works of art of socialist realism. The overall objective was the reshaping of the past through artistic production according to the new paradigm of understanding historical evolution through socio-economical lenses, placing therefore the class struggle at the basis of all the historical events in Romania’s past. The Romanian Communist Party, as small as it was before 1945, became the focal point of this historical class struggle, with its leaders transformed in historical figures.

PhD Dumitru Lăcătușu, CPES, University of Bucharest, The hypostases of an artist in the Securitate files: the case of Ion Nicodim

This paper discusses the case of the Bucharest subsidiary of the Romanian Union of Visual Artists (UAP) with a focus on Atelier or Studio 35. I propose the exploration of this case study through the analysis of reform attempts of UAP after 1989. In order to understand the effects brought by the change of the political regime, the apparent changes on one hand, and probable continuities on the other, the analysis takes into account the partnership between the Union and the artists exhibiting at Atelier 35 in Bucharest. Atelier 35 had a seminal role during the 1980s for the young artists who could not become UAP members anymore, and it was known to have offered more creative and artistic liberties, functioning as an oasis for freedom of artistic expression at the time. After 1990, Atelier 35 continued, on behalf of UAP, its partnerships with young artists in Romania, through a period of political transition, economic insecurity and unpredictability of the art scene. It remained one of the few UAP instances that benefited from continuous partnerships with young artists and novel art-production projects, in a stark contrast with the post-communist critique of the UAP in general. All of these characteristics have not been a privileged topic of research. During the years, it is clear that Atelier 35 has created its own mythology, one that I am going to explore through interviews with key-participants in the Atelier 35 project, and archival documents of the exhibitions that took place at Atelier 35 in the period 1980 – 2010. Through a comparative analysis of the 1980s on one side, and the 1990s and 2000s on the other side, the research, aims to dispel some of the rumors accompanying this unique case and offer a more balanced view on one of the most famous artistic spaces in Romania. 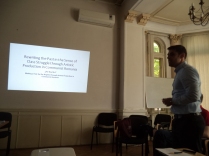 https://unibuc.academia.edu/CaterinaPreda
View all posts by artistuldestat →
This entry was posted in Results. Bookmark the permalink.